Cults can be religious or atheistic. Cults can be political or business-based. They can involve spiritual beliefs or beliefs about health or money. They can focus on meditation, politics, exercise, sex, or multi-level marketing. Cults can be as large as countries like North Korea or Soviet Russia, or as small as an abusive relationship between 2 people.

Knowing more about cults will help you understand more about how humans build relationships and groups of every kind.

Janja developed a brilliant way to explain cults with her bounded choice model. In this model, she shows that cult members aren’t strange people with wild eyes, but that they’re usually idealists who want to change the world. Cults and cult leaders take advantage of that idealistic dedication and turn all of it toward the cult’s own needs.

Every successful social group finds ways to engage people and energize them, but cults use four specific dimensions to bring people in and trap them there.

What is charismatic authority?

We can all identify charismatic people in our lives, from actors, musicians, and politicians to the best players on our favorite sports teams. Charismatic people are appealing and magnetic, and they draw us in with their skills, appearance, talents, or perhaps a special quality that we can’t quite put our finger on. Charismatic people may initiate hero worship or feelings of being wildly in love (as many of us may have experienced in our adolescent and early adult infatuations).

In healthy relationships, these wild and worshipful moments tend to fade, and we become able to view those people in more balanced and calm ways. But in unhealthy relationships and groups, charismatic people find ways to continually activate that intense infatuation and devotion. Successful charismatic authority figures keep followers captivated and entrapped through exhilarating utopian visions, constant displays of power, demands for commitment, demonization of outsiders, and incessant emotional manipulation.

Charismatic authority is the powerful emotional bond between a leader and his or her followers. It makes the leader seem deeply legitimate and visionary, and it grants authority to his or her actions. Anything he or she does is portrayed as vital to the vision and survival of the group. The ends always justify the means because the charismatic authority figure isn’t merely right; he or she is anointed, chosen, or blessed.

When followers believe that their leader is utterly perfect, they may convince themselves that anything they do in service to the leader is righteous and justified. Eventually, the leader’s needs justify the behaviors and actions of everyone in the group. The deep relationship followers have with their leader’s charismatic authority is the hook that keeps them engaged, susceptible, and willing to do whatever it takes to satisfy their leader’s every whim and desire.

Charisma lives in the eye of the beholder

The concept of charismatic authority was introduced by one of the founders of sociology, Max Weber, in his classic work on ancient religions, bureaucracy, and institution building.[i] Weber is regarded as the leading scholar on charismatic authority, and he identified a follower’s response to charisma as an ecstatic or intoxicated state.[ii]

Weber noticed that it is recognition by others that determines the extent of a person’s charisma. In other words: no followers, no charisma. Charismatic authority exists primarily in the eye of the beholder. This is why some people can see through a seemingly charismatic leader and ask, “How can anyone follow that charlatan?” while others may be completely smitten. Not everyone responds in the same way to charismatic authority figures.[vii]

Once followers have identified a person as a charismatic authority, it then becomes their duty to believe in him or her.  And to expand his or her domination, a clever charismatic leader offers something uniquely special that followers can only get from him or her – the hope of new beginnings, peace on earth, an enchanted afterlife, perfect health, a cancer cure, political revolution, social justice, or something as mundane as weight loss or financial gain.[x]

Transcendent beliefs and dogmas seem to be the focus of cults; yet in reality, the purpose of many cults is simply to serve the emotional, financial, psychological, and sexual needs of the leader with unquestioning obedience. The authoritarian personality of the cult leader helps ensure that his or her needs and desires are always the top priority.[xi]

However, this situation backfires reliably, because even if the leader started out with good intentions, it’s rare that a person can handle the kind of adulation and blind obedience that is demanded from and granted by cult followers – even if the worship and obedience are obtained through force. It is commonplace for charismatic authority figures to become unbalanced, egocentric, and toxic.

Having said that, it’s important to clarify that charisma or charismatic authority is not evil and does not necessarily produce a cult leader. We can think of charismatic leaders such as President John F. Kennedy, the Reverend Martin Luther King, Aung San Suu Kyi, or Nelson Mandela, to name just a few. These and other charismatic authority figures have been a positive force in society.

However, the influence over others that comes with charismatic authority – and the inherent power imbalance that is created – must always be kept in check.[xii]

Charismatic leaders have a responsibility to learn how to maintain their humanity in the face of constant adoration, and to apply rigorous checks and balances to their behavior so that they can protect their followers from harm. In cults, none of those protections exist.

Evaluating charismatic authorities in your own life

Unhealthy charismatic authorities treat others as means to an end and require unquestioning devotion to their (or their group’s) beliefs, desires, and demands.

If you’re involved with any charismatic leaders or groups, you can use this checklist to gauge the health of the situation. Are any of these statements true?

The leader or group has an inflated sense of importance and connection to greatness.The leader’s needs, ideas, and desires are overriding; they erase the needs, ideas, and desires of group members.The leader can do or say almost anything without repercussions; there are no checks or balances on his or her behavior.The leader belittles all other ideas and belief systems, and any other leaders who are in the leader’s realm (e.g., other New Age leaders if the leader has a New Age philosophy).The leader takes credit for anything good that happens, and blames others for anything bad that happens.The leader treats questions and challenges as threats, and he or she may see enemies everywhere – inside and outside the group.Members must idealize and revere the leader and the ranking leadership.Members who challenge the authority of the leader or leadership group are punished, publicly humiliated, shunned, or kicked out, and may be portrayed as enemy traitors.The leader claims special powers, knowledge, and lineage – or may claim to be divine.

If one (or more) of these statements is true, you or your group may be under the influence of a toxic charismatic authority figure. However, this doesn’t mean that this person is dangerous, and it doesn’t mean that his or her group is a cult. Your group would need to have all four dimensions of the bounded choice model active (this includes a transcendent belief system, systems of control, and systems of influence) before it could be considered a cultic group.

However, if this person’s behaviors are troubling (even if the other dimensions of bounded choice aren’t present), you may be able to suggest changes and see if your leader or group can – or is even willing to try to – alter these behaviors.

You can also share the features of healthy charismatic authority below to help the leader or the group understand the specific ways in which they are veering toward trouble. If they can’t or won’t change, you can use these pointers to find a charismatic leader or group that offers hope without idolizing one person (or one idea) at the expense of everyone and everything else.

Signs of a healthy charismatic leader or group

Healthy charismatic leadership involves being willing to learn from others, instituting checks and balances, maintaining a sense of humor and a sense of humility, being responsive to complaints and corrections, and treating people well and respectfully.

When the charisma of a person or group is healthy, people are drawn to it and invigorated by it. Healthy charismatic leaders can do a lot of good in the world.

When leaders are not healthy, their need for total devotion and control can destroy everything: relationships, groups, businesses, and even countries.

Healthy leadership is crucial to a healthy world.

A cult that failed due to a lack of toxic charisma 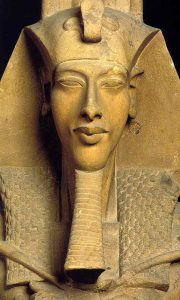 The cult I grew up in was based on New Age healing principles and was built around a man who channeled the spirit of an ancient Chinese sage. A lovely group of outsiders, geniuses, and artists (my mom included) gathered around him, and we were going to change the world and bring wonderful information and healing to everyone.

I watched our leader make the shift from a regular guy to the visionary centerpiece of our group, and I watched, even in my early teens, how the adoration began to damage him. He became less and less available, a leadership group formed around him, and we slowly shifted from a merry band of dedicated people into a cult (though none of us would have ever allowed you to call us that).

Once the cult formed, things began to fall apart. The group instituted many of the other dimensions of bounded choice, but even these weren’t enough to hold us all together. I was kicked out at 17 for communicating with outsiders (I write about it here), which was a terrible shock, but it also spelled the beginning of the end for our group. They imploded and disbanded about a year later.

I realized when I wrote Escaping Utopia with Janja that our cult failed because our leader could not move from everyday egotism into the bloated, toxic narcissism that cult leaders must develop. He was simply too decent a person to become a toxic charismatic authority figure.

I’m sure that he and others from the group may feel that he failed, and while it’s true that he failed to maintain a cult, he succeeded at maintaining his humanity.

Thank you, Marshall, for being a decent failed cult leader. Watching the damage adoration did to you helped me to never idealize or idolize anyone, because it’s a form of dehumanization and violence that can make some people lose touch with their ethics, their grounding, and even their sanity.

I now see toxic charismatic narcissists with empathy and sorrow instead of hatred. I know that they are deeply troubled and in trouble, but I also know that they are surrounded by people who are doing them harm and supporting their worst impulses. It’s a trap for everyone.

May we all retrieve our projections and treat everyone with dignity and humanity.

May we all be free.

How the Buddhist Faith Can Be Used to Manipulate